Democracy must be fought for, revitalized, and renewed. Institutions, like the Heinrich Böll Foundation, have been struggling against a significant headwind for some time now, as the authoritarian developing state has gained massive momentum.

With the publication “For democracy” and this online-dossier, we analyze the state of democracy worldwide as well as the possibilities of democracy assistance. At the same time, we provide insights into the Heinrich Böll Foundation’s political work for democracy. Concrete examples and regional analyses present a vivid account of our engagement. We take stock and examine the challenges that will face us in the future.

The second half of the twentieth century was characterized by a rise in democracy as a political system. In several waves of democratization in Europe, Latin America, Africa, and Asia, autocracies and military dictatorships were overthrown and initial steps
toward democracy were taken. The fall of the Berlin Wall in 1989 and the systemic change in East Central Europe, supported by civil protests, appeared to affirm this democratic upswing.

Democracy assistance soon became established as a field of political action. Over time, however, it has become clear that the transition from autocracy to democratic rule is difficult and by no means guaranteed. In many places hybrid regimes have emerged, existing in the gray zone between democracy and autocracy and proving to be quite stable. In several cases there have even been relapses into authoritarian forms of rule. Such examples cast doubt on the presumption that we are currently experiencing the triumph of liberal democracy. Especially in conflict regions and fragile states, democratization movements and democratization itself are in a difficult position.

Democracy is under pressure today in many parts of the world, even in its ostensible strongholds. The advance of populist movements and right-wing extremist parties has also entailed a loss of legitimacy for democratic institutions and parties. Economic special interests are challenging the independence of parliaments and administrations. Democratic decision-making processes are being undermined by endemic corruption, and political maneuvering room is being restricted throughout the world. Governments are increasingly taking action against civil society.

Repression against opposition is on the rise. The authoritarian developing state – as an alternative to democracy – has gained massive momentum. From Ethiopia to China, it promises stability and prosperity, albeit at the cost of freedom and the rule of law. For this reason Western democracy assistance, which started with a strong tailwind, has been struggling against a significant headwind for some time now. The United States and Europe have played no small part in this development: All too often they have disregarded their own professed values.

Democracy is not an automatic success. Democracy must be fought for, revitalized, and renewed. Whatever the different definitions, democracy always includes free and fair elections, political pluralism, the rule of law, the guarantee of human rights and basic political freedoms, separation of powers, independent media, and independent civil societies. While human rights are at times violated even in democracies, they are constitutionally flouted in autocracies. Advocating democracy and human rights is a normative imperative.

Throughout the world people are standing up for political, economic, and cultural rights. Many of these advocates of political freedom take great personal risks. Supporting democratic engagement worldwide is a core concern of the Heinrich Böll Foundation. Human rights, democracy, and ecology – this triad stands at the center of our international work. Together with our partners we seek to expand the
space for social participation and political emancipation. This requires tact, sensitivity, and a willingness to take responsibility. Progress has been made, but there have also been setbacks. We must continually re-evaluate how much room there is to maneuver – both for us and for our partners – and how far we can go without endangering them. In the present publication, we outline and analyze the state of democracy worldwide as well as the possibilities of democracy assistance. At the same time, we provide insights into the Heinrich Böll Foundation’s political work for democracy. Concrete examples and regional analyses present a vivid account of our engagement. We take stock and examine the challenges that will face us in the future.

The publication and online dossier close with a plea for democratic foreign policies that do not turn a blind eye to election fraud and blatant human rights violations in the name of alleged stability and that support critical intellectuals, independent media, and democratic groups. 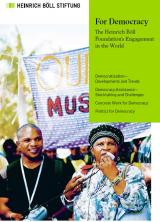 For Democracy. The Heinrich Böll Foundation’s Engagement in the World

The present publication “For Democracy” outlines and analyzes the state of democracy worldwide as well as the possibilities of democracy assistance.

Shrinking – closing – no space: Governments across all continents villainize civil society actors. Where does their sense of threat emanate from?
By Barbara Unmüßig