Ukraine in focus, what's next for its political, economic and social development?

The date that has been engraved in everyone's memory - February 24 - Russia's invasion on Ukraine began. The escalation of which has brought enormous social and political damages. After more than seven months, it is clear that security is understood differently in the East and the West of Europe. Therefore, among other things, from the perspective of Poland, it is crucial to find a solution to overcome these divisions. This issue was addressed by experts at the "Ukraine in focus" conference.

The “Ukraine in focus” conference is a special edition of the series “World in focus”- Warsaw International Meetings, organized by the Warsaw Office of the Heinrich Böll Foundation in Warsaw. This year's conference was held on October 17-18 at the Zielna Conference Center in Warsaw.

During the ongoing war, the empowerment of Ukrainian experts is crucial. It is important that these individuals have access to a forum for the exchange of ideas where they can discuss the future of their country. A lot of people from Ukraine stay in Poland, therefore, we are keen to narrow the gap between the ways in which security is perceived that exist between Western and Eastern thinking. When talking about Ukraine and its future, we need to actively emphasize our opposition to the ongoing aggression," says Joanna Maria Stolarek, director of the Heinrich Böll Foundation in Warsaw.

During the event, experts from both Ukraine and Poland took the floor in five panel discussions. The debates covered topics such as the role of language in the discourse on the Russian invasion of Ukraine, energy security in the midst of war, prospects for rebuilding Ukraine's agricultural sector, inclusive infrastructure transformation, as well as refugees and migration from a Ukrainian perspective. Below are the topics of the conference panels. We also invite you to watch recordings of the debates.

Who is talking about Ukraine and its security, and from what position?

The first day of the conference began with a panel moderated by Radio TokFM journalist Agnieszka Lichnerowicz, in which participated Jan Philipp Albrecht - president of the Heinrich Böll Foundation, Laurynas Vaičiūnas – chairman of the board of the College of Eastern Europe (KEW), Lithuanian journalist and reporter, Sofia Oliynyk coordinator of the Democracy Support and Human Security program at the Heinrich Böll Foundation in Kiev, and Agnieszka Legucka - political scientist, PhD in social sciences, analyst on Russia at the Polish Institute of International Affairs. During the panel, we discussed how we unconsciously reproduce harmful generalizations about the war in Ukraine through language. Together with experts, we also addressed the question of why security is understood differently in the East and West of Europe, and what we can do to overcome the existing divisions.

Who and from what position speaks about Ukraine and its security? [Ukraine in Focus, 17-18.10.2022] - Fundacja Heinricha Bölla

During the second debate, moderated by Ilona Jedrasik (Client Earth), Oksana Aliieva, coordinator of the Climate and Energy Program at the Heinrich Böll Foundation in Kiev, Anton Antonenko - vice president and co-founder of the DiXi Group think tank for research and consultation in energy, security and politics, and Joanna Maćkowiak Pandera, CEO of the Energy Forum addressed energy security in Ukraine. Russian aggression in Ukraine has affected energy security across Europe, and has highlighted the fragility of centralized models of electricity production. The panel looked at alternatives to Russian fossil fuels for energy sourcing. Could the ongoing crisis provide an apex for the spread of solutions based on renewable energy sources and distributed power generation?

Growing the future. Ukrainian agriculture in the face of war

The third panel was moderated by Agata Kowalska (oko.press). Her guests: Olena Borodina (National Academy of Sciences of Ukraine), Inna Paschenko (Regional Development Agency Siversky Region in Ukraine), Nataliia Pustilnik (WWF Ukraine) and Anna Danyliak (Ecoaction). The panel addressed the situation of Ukrainian agriculture in the face of war. The experts talked about access to food in Ukraine itself and abroad, as well as the impact of military action on the environment. They also looked at demands for rebuilding Ukrainian agriculture, bearing in mind the issue of climate change.

Growing the future. Ukrainian agriculture in the face of war [Ukraine in Focus, 17-18.10.2022] - Fundacja Heinricha Bölla

Old and new diaspora. Refugees and migration from a Ukrainian perspective

During the panel on refugees and migration, we were particularly keen to include the perspective of discriminated and overlooked groups in the context of the need to flee Ukraine. Moderator Myroslava Keryk (Nasz Wybór/Ukraiński Dom Foundation), together with panelists Olena and Joanna Talevich (w Stronę Dialogu Foundation), as well as Oleksandr Nikulin (Fight For Right), focused on the diverse identities of those leaving Ukraine since 2014, analyzing various forms of refugees and migration. The analysis was conducted from feminist and minority perspectives, taking into account the situation of Roma, people with disabilities, people living in Ukraine without Ukrainian citizenship, and the presence of these groups in media representations of war, refugees and migration.

Refugees and migration from a Ukrainian perspective [Ukraine in Focus, 17-18.10.2022] - Fundacja Heinricha Bölla

As part of the panel, Maria Kurinna (ZMINA Information Center for Human Rights) sent a recording of her speech, in which she emphasized the need for psychological support for refugees and talked about her own experience as a refugee and internally displaced person. We sincerely invite you to watch her contribution.

During a panel moderated by Joanna Erbel (CoopTech Hub), experts Iryna Ozymok (Western NIS Enterprise Fund), Anastasia Bobrova (Cedos) and Olga Polunina (Dixi Group) discussed how to rebuild housing, transportation and service infrastructure in a sustainable way, and how to ensure that gender equality, as well as the needs of people with disabilities and minorities, are taken into account in the design process. Although the war continues, the process of developing directions for the country’s recovery has already begun. During the discussion, we asked representatives of Ukrainian civil society for recommendations for an inclusive, green reconstruction.

We concluded the two-day event with new ideas, expanded horizons and gratitude to the expert individuals who shared their knowledge and perspectives with us. We would also like to thank all the people who listened to the discussions held during the conference, whether on-site or via broadcast on our website. We hope to continue discussing the topics raised during the event! We invite you to listen to the broadcast and learn more about the activities of our guests. All recordings of the debates are available on our YouTube channel, both in Polish and English:

Recordings of the debates in Polish

Recordings of the debates in English

Photo gallery from the event: 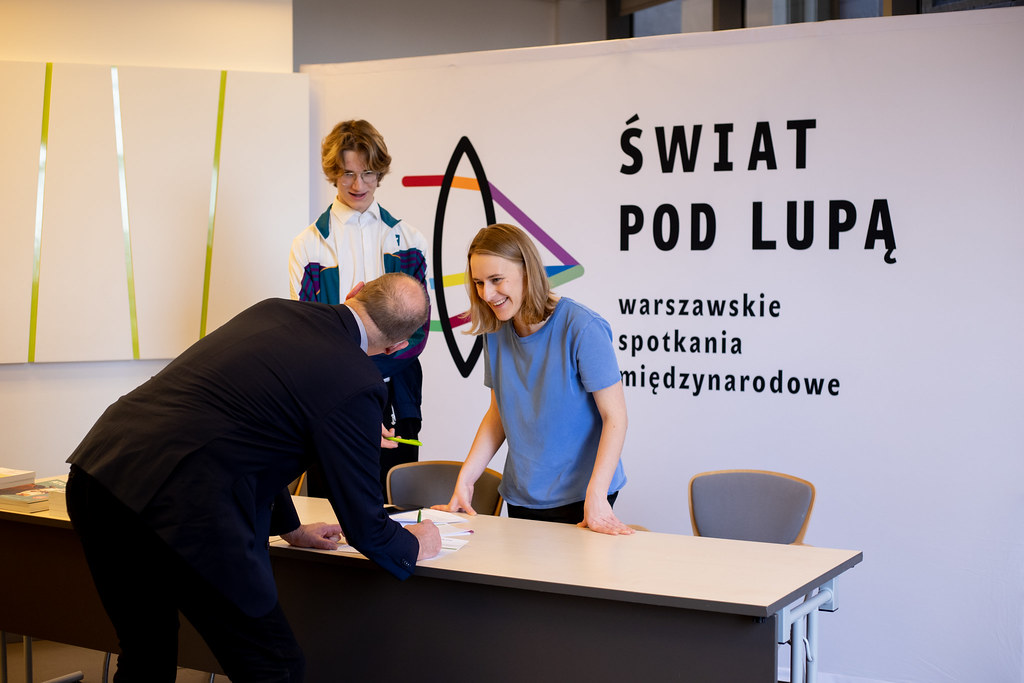 The views and conclusions presented during the debates express the opinions of the panellists of the debates and do not necessarily reflect the official position of the Heinrich Böll Foundation.

Invitation
Where is the world headed? How can citizens shape their social, economic and environmental circumstances? How can Poland make its mark on a changing Europe? Will we be able to stop the climate change? These are just some of the questions we will attempt to answer, hopefully with your help, in order to better understand global problems that impact is in our daily life.

Where is the world heading and what kind of future awaits Europe? How are today’s uncertainties affecting Poland and how will we deal with them? The World in Focus is an invitation to engage in meetings and discussions on international issues.