Can we still make it? 1.5°C as a climate challenge.

What kind of actions are indispensable to take on by cities, regions, countries, business, societies, namely the entire international community, in order to enhance the responsibility and efficiency towards the climatic threats? How can we all take an action towards the emissions while still having the possibility of sustainable development and ensuring the poverty decrease?

October 8 saw the release of the Intergovernmental Panel on Climate Change Special Report on Global Warming of 1.5°C on the effects of global warming resulting from an increase of 1.5°C in average annual temperature over pre-industrial times. The report’s conclusions will influence negotiations during COP 24, i.e. the Conference of the Parties to the United Nations Framework Convention on Climate Change, which will take place in December this year in Katowice.

Following the report’s publication, an international conference was held on November 7, 2018, entitled "Can we still make it? 1.5°C as a climate challenge: How can the temperature increase be kept at that level?” by the Heinrich Böll Foundation in Warsaw, the Institute for Sustainable Development, the Capital City of Warsaw, the Climate Coalition and the “Polska 2000 Plus” Forecasting Committee of the Polish Academy of Sciences. The event took place at the National Ethnographic Museum with the participation of experts and representatives of politics and civil society (Conference Agenda).

The sessions were divided into three thematic groups on the directions needed in global climate action, the ability to meet energy needs 100% from RES, and the role of cities and local communities in maintaining temperatures at the 1.5°C level.

Before the debate, an introductory word was given by Deputy President of the Capital City of Warsaw, Renata Kaznowska, emphasising the need for the cooperation of various stakeholders and for adjustment to climate change, especially in urban areas.

Barbara Unmüßig, President of the Heinrich Böll Foundation highlighted the political dimension of the Paris Agreement and the Special Report. She emphasised that the accumulated sum of global environmental threats requires immediate remedial action. She also drew attention to the tying of climate action to sustainable development goals.

The key message of the report is that we are able to meet the 1.5°C goal. This requires radical emission reductions and zero CO2 emissions by 2050. We must take all possible measures to protect and restore natural ecosystems, and to develop a closed-cycle economy and introduce changes in food production systems.

The report is clear in saying that 1.5°C is the new 2°C. The 1.5°C threshold is no longer up for negotiation. If the temperature rises by 2°C, people will suffer. However, the current climate targets of governments are insufficient to meet the 1.5°C challenge. We cannot risk a warming above this threshold and irreversible changes for societies and the planet. Don’t delay in acting! – this is the report’s next message.

Ecological crises are very closely tied to the social fabric of our planet. Global warming, rising sea levels, and ecosystem degradation are a threat to millions of people. These issues must therefore be approached holistically, and with respect for the rights of local communities- Barbara Unmüßig.

The next speaker was Anders Wijkman, honorary president of the Club of Rome, who talked about the technological challenges of the Paris Agreement. He agreed that environmental challenges are closely related to the limitations of the neoclassical economic system. He pointed out that new technologies can help achieve sustainable development goals, but are not an answer to all of the challenges. What is needed is for the economy to be transformed, above all with a departure from fossil fuels in favour of systemic support for renewable energy, especially in developing countries.

At the end of the part one of the conference, former IPCC Vice-Chair, Prof. Jean-Pascal van Ypersele, presented the main content of the Special Report.

He argued that “holding the increase in global average temperature to well below 2°C above pre-industrial levels and pursuing efforts to limit the temperature increase to 1.5°C" as stated in the Paris Agreement means de facto that the ultimate goal of the agreement is to stop warming somewhere between these values, at around 1.75°C. Achieving 2°C or somewhere close will constitute a failure to comply with the agreement. He also invited experts to get involved in preparing the next two special reports on land use and the cryosphere.

Above all, van Ypersele pointed out that limiting global warming and the negative effects of climate change is possible, saying that “Humanity is able to stop global warming and contribute to more responsible and sustainable governance,” by reducing global emissions immediately: by 45% (of 2010 levels) by 2030 and achieving emission neutrality by 2050. We are already observing the catastrophic consequences of climate change, such as increasingly frequent heat waves, droughts and torrential rains. Maintaining the current global emissions trend would lead to 1.5°C warming within even the first half of this century (between 2030 and 2050), and thereby to the intensification of these phenomena. Furthermore, the risk to food security and water resources in the world would increase. 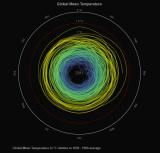 After the introduction, it was time for discussion panels, where many interesting topics were raised. Richard Folland noted that the United Kingdom had taken both decisions harmful to the climate, such as shale gas exploitation, and positive actions. The country had managed to uncouple economic growth from increased consumption of energy and raw materials. The country is also developing offshore wind farms that are generating new jobs. He stressed that Great Britain wants to stay in the ETS (European Emissions Trading System) even after Brexit. Despite its drawbacks, the ETS program has proven effective in reducing emissions within the EU, mainly by increasing CO2 prices.

Tomasz Chruszczow said that Poland needs the mining industry to supply coal not only as a fuel, but also as a raw material for the chemical and pharmaceutical industries. The important topic was raised of the growing popularity of populists, who are often climate-change deniers. In this light, the need to educate, inform and engage public opinion about climate protection is growing yet more powerful and more urgent.

Barbara Unmüßig noted that Germany is seeing an increase in support for the Green Party, which is demanding strong action to protect the climate. The present German Chancellor, Angela Merkel, was instrumental in lowering the European Union’s announced climate ambitions for COP24. Coraline Goron, in turn, pointed out that, unlike in Germany, energy transformation in China is being carried out by major energy companies developing, among others, wind energy in the north of the country.

On the subject of developing renewable energy, Morten Baek noted, “When Kennedy set the goal to put a man on the moon, there was no suitable technology for this. We need to fix a goal that will set the direction to develop in, and then consistently strive for it. We know that 100% RES energy is a must, so we have to make that intention a reality."