The annexation of Crimea in March 2014 and the launch of a hybrid war against Ukraine was Russia’s answer to the revolution triggered by Euromaidan. The conflict continues to pose fundamental challenges for the European Union, and raises the question of whether the EU will maintain its commitment to the political and economic consolidation of those of its Eastern neighbours which aim to make sovereign choices based on the rule of law and democracy.

Although the EU has reacted to the conflict in a unified manner by imposing sanctions on Russia, statements made by some European political leaders have undermined the public perception of European unanimity. Officials of the Visegrad countries, for instance, have been divided on certain aspects of the conflict.

In order to explain the differing reactions of individual Visegrad countries, the offices of the Heinrich-Böll-Stiftung in Prague and Warsaw asked their partner organisations to systematically analyse how these countries have dealt with the Russia-Ukraine conflict. Particular consideration was to be given to the differing historical experiences, public opinions, economic relations, and energy- and foreign policy of the Visegrad countries.

We hope that the findings of this report will stimulate further critical and constructive debate on the perspectives and positions of the Visegrad Group and its role within the EU.

Audio recording of the seminar combined with the book launch:

Commissioned by the Heinrich-Böll-Stiftung offices in Prague and Warsaw 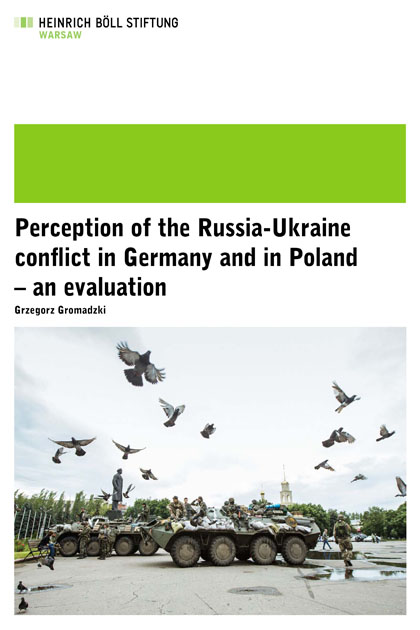 The Russia-Ukraine conflict has been discussed widely in the media and in public debate both in Poland and in Germany. Grzegorz Gromadzki discusses a diversity of opinions with respect to the conflict, possible solutions and roles of both EU states.

Press-Statement: Civil society actors and think tank experts from Poland, Ukraine, Russia and Germany have met in Potsdam on 22-23.09.2015  to confer on the crisis of the European security order and on ways out of the current political-military conflict between Russia and Ukraine.

Dealing with Authoritarian Regimes: Challenges for a Value-based Foreign Policy

From China to Russia to Iran, voices questioning the universality of liberal democracy are growing louder. How confidently can and should the West stand up for democracy and human rights in the world?
By Ralf Fücks

We would all love to have a democratic Russia as a partner in the European Union. However, the country’s current political leadership is moving away from Europe.