Launch of the Energy Atlas 2018

The democratisation of energy transition processes has already begun, putting the future in the hands of both cities and municipalities, as well as millions of Europe’s ordinary citizens.

On 10 December 2018, the Polish edition of the Energy Atlas, a publication by the Heinrich Böll Foundation in Warsaw developed in close cooperation with the Institute for Sustainable Development, was presented at Katowice’s Climate Hub, a space for open debate on climate issues.

The participants in the discussion entitled "How to benefit from the development of renewable energy sources in Poland?” included:

The discussion was moderated by Dagmara Kubik of Katowice Smog Alert.

We feel extremely delighted and proud that a group of international experts from Poland, France, Greece, the Czech Republic and Germany contributed to the creation of the Energy Atlas, constructing a comprehensive picture of renewable energies and their potential all over Europe. Owing to their involvement, we have been able to demonstrate different perspectives on the challenges and opportunities facing Europe in implementing The Paris Agreement.

The Energy Atlas makes a significant contribution to an open and informed discussion on energy transition in Europe while supporting this ambitious European project aimed at uniting local communities. – Ellen Ueberschär 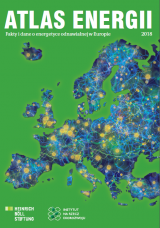 The Energy Atlas: facts and figures about renewables in Europe

The Atlas tells the story of Europe’s energy transition. It offers a broad overview of links to and spill-overs from renewables and, above all, it demonstrates that sources of renewable energy can be developed effectively.

How can efforts to improve the climate and support eco-innovations be brought together with attempts to foster prosperity in a democratic and socially equitable way that improves living standards for everyone? These and other matters are analysed in the Energy Atlas, a publication that shows the opportunities brought about by a comprehensive transition from the current energy system to a system that would be climatically both just and ambitious.

The publication can be downloaded here.

Energy transformation is happening right before our eyes and the European Union is facing serious challenges, for example, in how to simultaneously carry out decarbonisation, decentralisation and digitisation. A shift towards efficiency and renewables will provide a chance for the economy, society and the environment, but success will depend on joint action at European, national, regional, local and citizen levels.

The promise made in Paris – to create a world of clean and sustainable energy – can only be kept if we integrate the energy sector into an EU-wide network. Energy transition is a wide-ranging project covering the whole of Europe and, therefore, the European Union needs to come together as a climate union. Grid stability will be ensured by the development of renewable energies that are both democratised and decentralised. Yet, at the onset of the transition, feed-in tariffs for renewable energy sources will be required, as is the case with any new technology. – Annalena Bearbock

The challenge of shifting away from fossil fuels, which we are currently facing, requires profound structural changes. They might be particularly radical for Poland due to its reliance on coal for the generation of its energy. The Energy Atlas is an adequate answer to concerns raised by the transition. It advocates change by providing specific and relevant data, facts and figures.

Cities consume over two thirds of the world’s energy and account for 70% of carbon dioxide emissions. That is why it is cities and citizens that are the foundation of the energy transition in Europe, when seen as a step towards greater democratisation and decentralisation. Europe’s cities are becoming increasingly green. Some of them, for instance Bolzano, Basel, Oslo and Reykjavik, are already powered by renewable energy sources – either partially or entirely. Almost 1000 local leaders in Europe have engaged in making their cities carbon-neutral by 2050, and, in Germany, 42% of renewable energies are currently owned by citizens and energy cooperatives.

If we want to see change, we need to make it socially acceptable. – Matthieu Ballu

Many drops make a river

Polish society is ready to transition. Local governments, social movements and businesses all want to develop renewables and citizen energy as they think this will bring economic, health and environmental benefits. Other places in Europe are facing the same situation. The publication of the Energy Atlas is our attempt to support these voices with sound reasons so that they can be translated into national policies. A progressive, future-oriented, modern energy supply must come into being in the framework of a broad social dialogue, including and taking into account the people, in order to demonstrate tangible benefits for all of us.

This also implies the development of energy democracy: a shift away from large, centralised fossil fuel power plants towards citizen energy and the creation of local energy communities.

Just transition is about sharing the cost: the most deprived people need to be supported. – Joanna Maćkowiak-Pandera

Towards a cleaner future

The data on employment provided by renewables presented in the Energy Atlas demonstrates that the sector is already a significant employer. In 2014, the European energy sector had more than one million employees, which placed it second in terms of the number of jobs per inhabitant. Currently, Europe ranks fifth behind China, the USA, Japan and Brazil, and it might soon be surpassed by emerging economies. Most jobs in the sector of renewables are linked to energy production from wind, sun and biomass. It is the fastest growing sector with the biggest decrease in costs. Moreover, when compared to mining, the jobs in renewables are of a better quality.

All the participants stressed that technological solutions are at our fingertips, but what we need is the political will to reform energy policy and protect the climate.

Firstly, we need to change our approach towards business relations. We should support the sale of comprehensive services rather than individual components.

Secondly, we are living in an information world where digitisation and smart energy management are the key to success.

Thirdly, dispersed energy networks offer better energy security in terms of resilience both to attacks and to an unstable renewables-based energy supply.

Fourthly, transport is another sector that requires transition. We need to expand green mobility chains, such as walking, cycling and public transport.

If we do not change tack right now and continue, against logic, to subsidise non-renewable energy sources, we will soon have to face so-called stranded costs, i.e. the costs of poor past investment decisions. – Andrzej Kassenberg

Recording from the debate entitled "How to benefit from the development of renewable energy sources in Poland".