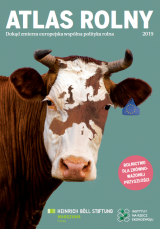 The Atlas presents benefits that a well-drafted reform of the common agricultural policy (CAP) would bring to rural areas, environment quality and society at large, and threats posed by a lack of changes in agricultural policy. The Polish edition of the Agriculture Atlas consists of two complementary parts: 15 chapters presenting agricultural issues from a broader European perspective and four chapters regarding the situation in Poland. The Atlas is a result of cooperation between experts from various European countries, an approach aimed at strengthening social movements and citizen actions calling for changes in agricultural policy and their arguments in favour of sustainable, ecological and socially sensitive development in agriculture.