Democracy is a system in which political parties lose elections, stated Adam Przeworski. After all, what matters is who failed and why. When analysing the structure of party supporters and the shifts in their preferences, parliamentary elections 2015 can be seen as a reversal of several trends.
By Waldemar Wojtasik Ph.D. 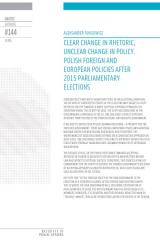 The Institute of Public Affairs monitored the electoral campaign before the 2015 parliamentary elections in Poland for Eurosceptic and populist trends, focusing on ideas of Polish parties for foreign and European policy.The aim of the analysis was to describe positions of the main political forces in Poland towards the most important issues in European agenda.

Victory of national conservatives in Poland

Poland has elected its new government. Not a single left-wing party has made it through the elections. Director Irene Hahn-Fuhr comments the outcome of the Polish parliamentary elections from a European perspective.
By Irene Hahn-Fuhr

Small corrections or a heavy earthquake? Polish European policy after the elections

The upcoming parliamentary elections are likely to bring several changes to the Polish political scene that could visibly influence the Polish European policy. Institute of Public Affairs and Heinrich Böll Foundation are pleased to invite you to a post-election briefing.

Greece before the elections: “The old political system is in turmoil”

This Sunday, September 20, Greek citizens will go the polls for the third time in just eight months. While the refugee crisis in Europe has ousted Greece from the international headlines, the country’s political landscape is undergoing some deep and significant shifts. We spoke with Olga Drossou, director of our hbs office in Thessaloniki, to shed light on what moves Greece in these times of turmoil.

Director Irene Hahn-Fuhr comments for boell.de and German audience the outcome of the Polish presidential elections, with a special focus on the European dimension.
By Irene Hahn-Fuhr

Poland and Europe – a definite ‘maybe’

A combination of low-turnout and a focus on national security issues boosted the far-right and the incumbent government parties. Despite the mixed message, it is clear the Poland remains firmly in the pro-EU camp.
By Irene Hahn-Fuhr

Barely three months after its official formation Hungary’s new green party, LMP (Lehet Más a Politika / Politics Can Be Different) has managed to entrench itself on the country’s political map. Standing in coalition with the small Humanist Party, LMP obtained 2.6 % of the votes, coming in fifth place, well before the liberals, who have reached an historic low and may well disappear from the political landscape. This green success was overshadowed, however, by the unexpectedly strong showing of the radical right.