From Migrants to Ministers

The question of the integration of the diverse Muslim communities in Western European countries has recently become one of the most important issues in the debate about the nature of national identity in European societies and the idea of Europe itself.

In recent years, the presence of people from Muslim communities amongst the political, cultural (including media), sporting and economic elites of Western Europe has increased significantly. The question of the integration of the diverse Muslim communities in Western European countries has recently become one of the most important issues in the debate about the nature of national identity in European societies and the idea of Europe itself. The above-mentioned trends are clearly different from the negative and stereotyped ideas about European Muslim communities in Poland. On the Polish internet and in the media, including the liberal media, this complex issue is present only to a very limited extent. However, as an important element which shapes the internal social and political situation of Warsaw's main European partners, especially Germany, it is also important for Poland. The phenomenon itself and its consequences for Poland are presented in the analysis "From Migrants to Ministers. Political Integration of Representatives of Muslim Communities in Elites in Western Europe - Conclusions for Poland" (in Polish) by Adam Balcer.

From Migrants to Ministers 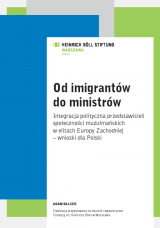 From Migrants to Ministers.

Main thesis of the analysis:

1. In recent years, the issue of the integration of internally very diverse Muslim communities living in Western European countries has become one of the most important topics of the debate concerning the national identities of European states and the idea of Europe itself. Currently, the attitude towards Muslims as current and potential co-citizens is divided in the political scene between the European mainstream formed by social democrats, greens, liberals and Christian Democrats, who mostly identify themselves with the civic idea of the nation, and the growing national populist and extreme right-wing groups, who prefer ethnic nationalism and nativism. The identity debate is particularly heated in the centre and centre-right parties.
2. The civic camp underlines the necessity to firmly oppose fundamentalist and extremist tendencies in European Muslim communities but also postulates that efforts undertaken by state institutions to integrate them should be intensified. It also stresses that the integration requires a rejection of attempts by nationalist and extreme right-wing forces to exclude a priori people of Muslim background from national communities.

3. Further progress in the integration of Muslim communities in the EU requires a much clearer recognition of:
- their very large ethnic, religious, economic, social, political diversity and the various results of integration policies,
- the undeniable successes of integration processes that have already been achieved, despite the serious problems still facing them.

4. Over the last dozen or so years there has been a significant increase in the presence of people from Muslim communities amongst the political, cultural (including the media), sports and business elites of Western European countries. Their advancement is often unprecedented and spectacular. This process is likely to continue in the coming decades. In political fields, it takes place at all levels: municipal, urban, regional, national and European, and concerns the legislative and executive power as well as party leadership structures. Young people and women are often clearly over-represented among politicians originating from Muslim communities compared to the European average. The integration of politicians originating from Muslim communities in political life takes place mostly through the left and center parties. However, it also currently occurs in the center-right parties. There are also changes in political sympathies within Muslim communities, which are becoming more similar to the rest of Western European societies in this respect (shifting towards the center and even center-right).

5.  The scale of political integration of Muslim communities varies from country to country in Western Europe due to different social, economic and cultural circumstances. Germany is a country where it has been particularly rapid in recent decades.

6.  The above described positive trends are in contradiction to the negative and stereotypical perceptions about European Muslim communities predominating in Poland. On the Polish Internet and in the media, including liberal organizations, this complex issue is present to a very limited extent even in the case of Germany – definitely the most important partner of Poland in Europe.

7. Public opinion polls show that the aversion of Poles to European Muslims (which also characterizes, although to a lesser extent, citizens with liberal and left-wing views) is generally much stronger than that of Western Europeans. Moreover, Islamophobia has become an important identity marker for many Poles and an instrument for mobilizing the electorate used by a large part of the Polish political elite.

8. The negative attitude of the Polish population towards European Muslims is associated with the growing distance of Poles from Western Europe, often perceived as a culturally different reality. The noticeable, steadily growing presence of people of Muslim origin amongst the mainstream European elites, especially German ones, reflecting the inclusive nature of these Western communities, may make the sense of alienation from the mainstream EU that many Poles feel even stronger. Islamophobia in Poland may also cause increasing tensions in the relations between the Polish authorities and EU parties and institutions.

Please note that the views expressed by the author do not necessarily reflect those of the Heinrich Böll Foundation.